Former Black Stars captain, Asamoah Gyan has issued an apology to the public for the usage of “nonsense” in reaction Majeed Ashimreu’s Black Stars snub.

Gyan, in an earlier tweet described Anderlecht midfielder, Majeed Ashimeru as the best this season beside Arsenal man, Thomas Partey. Ashimeru, 24, has played 31 out of 32 games with three goals to his credit in the Belgian Jupiler Pro League this season. Interestingly, the former West Africa Football Academy midfielder has missed the 27 man squad named by Ghana coach, Otto Addo to face Nigeria. Gyan took to his Twitter handle to apologize for his earlier comment but insisted Ashimeru should have been in the squad. 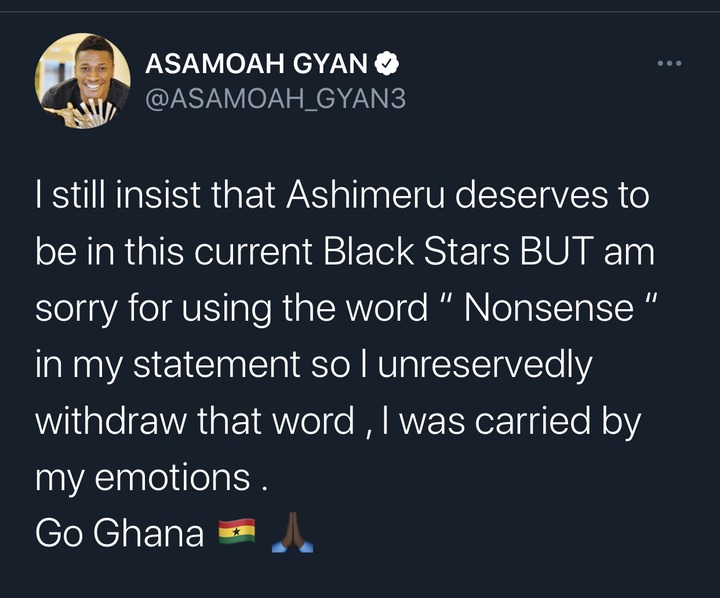 The Black Stars will face the Super Eagles of Nigeria in the first leg of the 2022 FIFA World Cup at the Baba Yara Stadium on Friday, March 25. The second leg will be held at the Moshood Abiola Stadium in Abuja four days after the first leg clash in Ghana.

The winner of the two leg tie qualifies for the World Cup later this month in Qatar. Ghana is eying a return to the World Cup after missing the last edition in Russia 2018 with Nigeria chasing a fourth consecutive World Cup appearance.

“We were denied a clean goal against Asante Kotoko” - Prince Koffie